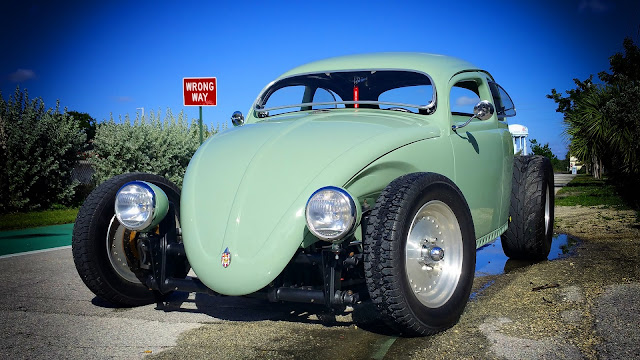 This article was originally posted by our friends over at www.superfly-autos.com. For more amazing car content, check them out now!

Father and son team build one of the fliest Volksrod we’ve ever seen.

When we are on the search for SuperFly metal from all corners of the world, it’s fresh to get an email telling us that we have inspired someone, to show us their latest project. A few weeks ago, we were contacted by a nice chap called Hunter Fernon, who saw the feature on Chris’s epic steampunk inspired Volksrod build and just had to share his and fathers latest project.
We will let Hunter give you the low down on this slick build,
Well I went ahead and did it, I finally broke down and bought a Bug, it’s been 20 years since I’ve owned one and I have had a bug up my ass (no pun intended) to get one again ever since I had first seen a Volksrod. The combination of my love of Hot Rods and VW’s is hard to resist, and more so the fact that with a Volksrod I can piss of purist in both cultures is an added bonus.

This is what she looked like the night I bought her, the bug is a 1972 with early fiberglass fenders and running boards all around, definitely was an 80’s love child, but it does have character. The bug has a 1641 with duel kadron carbs so it does have a little power while still being reliable. Other mods are Centerline wheels, fiberglass dash with more guages than a 747, scat shifter, Big Wig rear wing and flamed door panels, droped spindles, front disk brakes, one peice windows and it also sits about 1-1/2″ off the ground in the back.

I picked up a new body to replace the old one that is currently residing on the pans, it is a 1962 shell that is in very good shape, never been hit, perfect uncut dash and a smoothed rear deck, one piece windows with extra regulators and glass, a shell that any purist would love. The only metal that needs to be replaced is a small section of the driver side heater channel, needles to say this is a vast improvement from the current body and I only paid $140 for the shell (The heater channel is going to cost more that the whole body!!!)

Now I have to find a hood and figure out how I want to chop the top I’m kinda diggin that Cappella Chop Top but maybe I’ll score another shell so I have more options on which way I want to go with it. So after months of deliberation and the fact that talking about chopping a bug and actually chopping a bug there comes a time to just Cut and go from there. We decided to go with the Capella Chop and we also decided that it would be a good idea to document what we did since the only reference to doing this kind of chop is a copy of a copy of a chop done in the 70’s, needless to say we had a lot of questions and hopefully we came up with some answers which also gave us some more questions.

After much cutting and figuring things out, T=the body fitted like a glove, no clearance issues with the motor or deck lid like everyone said there would be, the only thing that I am concerned with at this point is lowering the front end, I know that the Tinbeater front end lowers another 2″ but I need another 6″ and I already have dropped spindles, We’ll figure something out, we always do.
Here is some of the fab work that was done to the tunnel. Better than the original, my brother-in-law can weld like really well but I am a crazy grindin’, after the bodywork you will never be able to tell.

So after more than seven years worth of cutting, grinding, long days and nights, here is the result.

We have to say that the boys have done an amazing job, especially considering that it was actually built on their drive way. That colour choice is a winner in my books, subtle, fresh and compliments the Volksrods curves.

The rebuilt engine is now a work of art and looks super clean. A great job!

If you want to get the full low down on the entire build process, you can find all details and photographs right here www.volksrods.com/forum/showthread.php?t=19805
Tags: classic vw, custom vw, Slammed, volksrod, Volkswagen
Back to blog
Add to Wishlist
0
0