IN A LAND WHERE V8’S RULE THE ROADS, ONE MAN’S DESTINY WAS SAVED BY A CLASSIC FROM A TIME GONE BY.


The United States of America is a huge country with thousands of miles of road to travel and the weapon of choice for the majority drivers is a fuel guzzling SUV, pickup truck or good old American Muscle. And believe me when I say it would take something really special for US citizens to drive anything else that falls out of those categories. However, there comes a time when something rather special comes along and turns things on its head and boy do we have a unique piece of automotive history here folks. 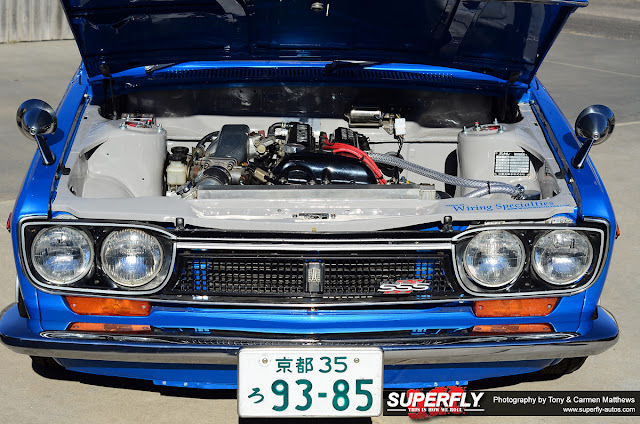 Take for instance, Chris Hout who is the owner of this superb Datsun Bluebird Coupe SSS. He was a man who was geared towards American wheels at the age of 18 years, when he acquired his first car, which was a Dodge Neon. However, that all changed at the age of 19, when Chris entered and competed in SCCA Racing (Sports Car Club of America) with his Dodge. Chris had a few races in the Dodge, but was really annoyed with the amount of electric issues the car had, which really didn’t help him gain any ground in the races.
Then at one of his races, he was talking to a fellow driver, who suggested to him to trade in the Dodge and get himself a Datsun 510. He told Chris about their history and just how capable they are on the track and with that, Chris was on the hunt to find one. On his travels to find the perfect Datsun, he came across various other Japanese delights and from that moment on, Chris was a converted man to all automotives from the land of the rising sun.
‘I’ve owned Japanese cars for the most part now, as the aftermarket choices for these rice rockets are so large’ recalls Chris. He loves how a four cylinder on boost will outperform a V8 and not to mention the awesome sound they make at high rpm’s. At the time, Chris had just started a new job and so the extra income was perfect to purchase the Datsun and to find the right example. As Chris was searching for the Datsun, he instantly started to have a soft spot for them.
‘I love the lines of the car and the simplicity of the design, they were so advanced for their time as they came with standard front brake discs and independent suspension’ recalls Chris. To think that these now super rare and retro classics were called ‘The poor man’s BMW’ back in the day, who would have that thought that they are now regarded as gold dust by enthusiasts? Through hours of searching the web and local classified adverts, Chris managed to locate three examples. 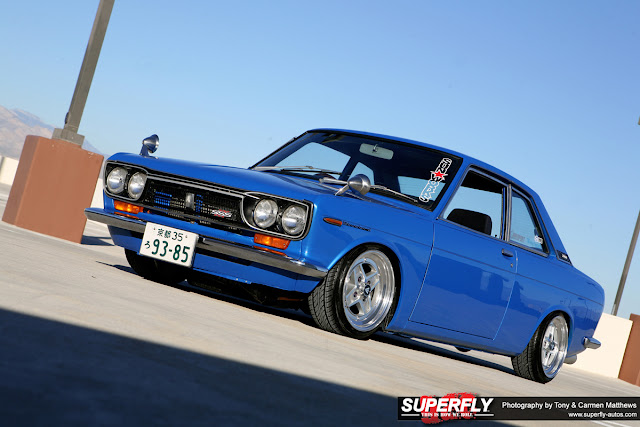 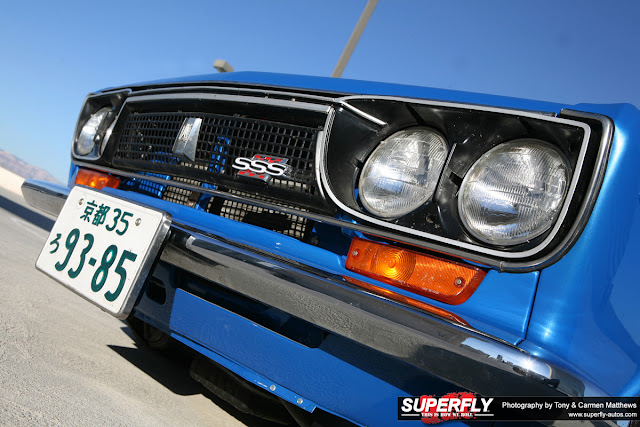 One is Arizona, one in Colorado and the other was local to Chris in Dallas Texas. So before travelling out too far, he decided to take a look at the one in Dallas and lucky for him, it was a winner! However, this isn’t the Datsun you see on these very pages, so let me continue. What Chris saw was a 1971 Datsun 510 four door, but at the same time Chris spotted the Bluebird SSS you see before you.
Of course, Chris wanted to buy the SSS, but the owner wasn’t going to budge as he knew just how rare this version of the 510 was in the States. So Chris settled with the 510 four door and was still happy with his acquisition. Then six months later fate took its hand and Chris’s four door got hit and damaged by another car on the streets. The car was in desperate need for a new door and so he contacted the original owner John Roper (Writer/Photographer for Super Street magazine) for his help to find a replacement. The telephone call would change Chris’s life forever as John did have a spare door, but he also informed Chris he was in need of cash. 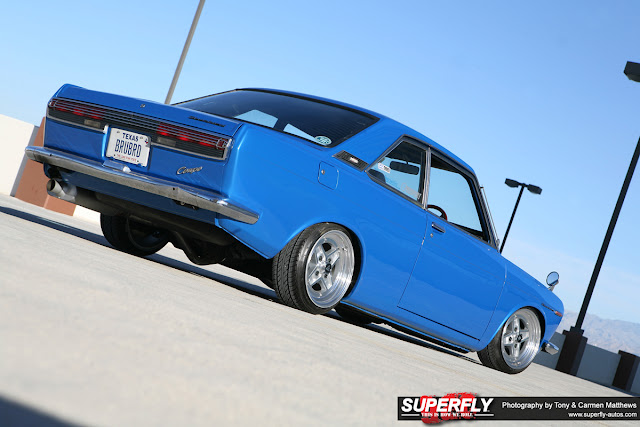 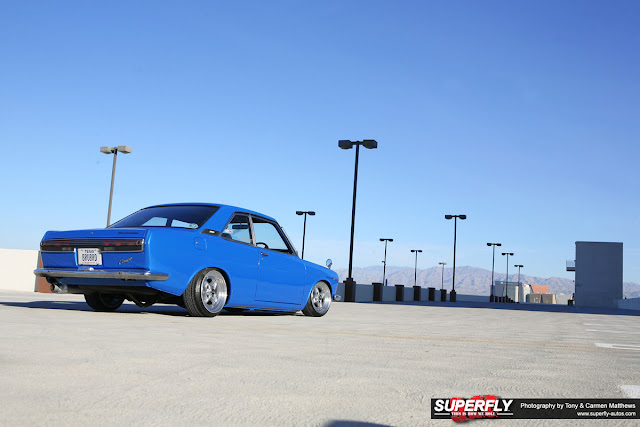 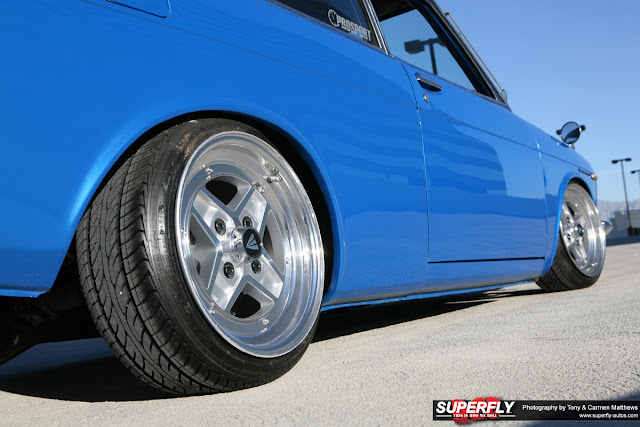 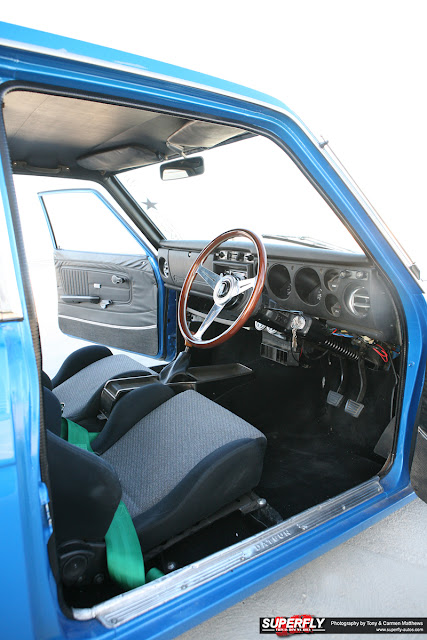 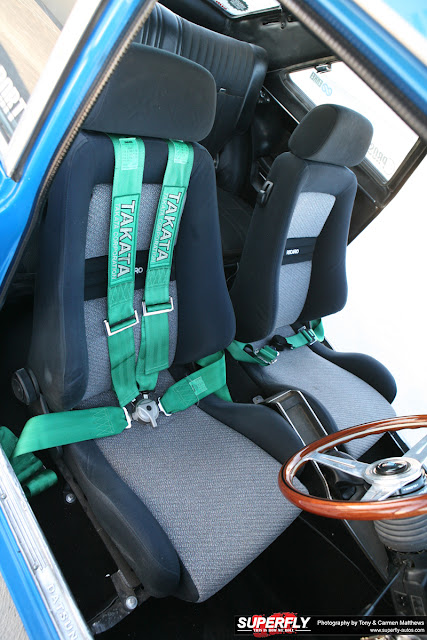 Full Article: http://www.superfly-autos.com/features/nostalgic-hero-retro-datsun-510/
Back to blog
Add to Wishlist
0
0