Use Code OCTOBERSAVINGS For Up to 15% Off!

The golden 80’s have to be my favourite decade, as my childhood and teenage years were mostly spent riding bmx bikes with no helmets, watching epic movies like the ghosterbusters, Porky’s and Back to the future, to playing Mario Brothers on my Gameboy and heading down the local arcade to play SEGA Outrun. Man those times were just amazing and to me and when it came to cars, my two favourite had to be the Lamborghini Countach and Ferrari Testarossa. I remember the posters I had on my bedroom wall of these two and dreaming about owning them one day. 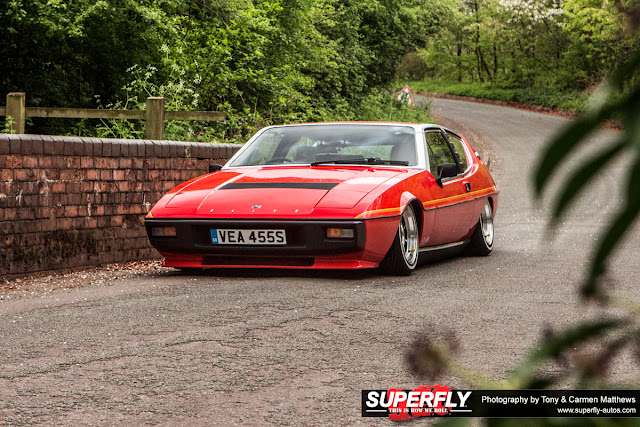 So we were super excited when we got to meet the owner of this SuperFly 80’s Lotus Elite, Luke Gilbert. It was clear from the get go that this cool dude was an 80’s geeza through and through. I mean take for example his vehicle off choice…something that isn’t the usual of what you see rolling the streets right. So as we started to snap away with the camera, the conversation started…
To fully appreciate this car and the ethos behind it explains Luke, we need to go way back to my childhood to try to understand the influences that have contrived to produce the car. I grew up in a golden age of children’s tv watching such legendary shows as The Banana Splits, The Monkees, The Red Hand Gang, Sesame Street, The Hairbear Bunch and many more. It’s here in amongst the subconscious child’s mind influenced by the cars, clothes, skateboards, roller-skates and pop socks that The Red Panther Slammed Lotus Elite was conceived. 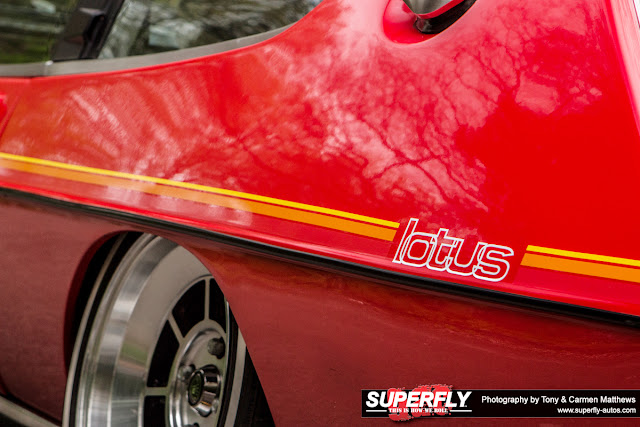 In the preceding years and as I grew up I had always had the niggling question buzzing around my head of ‘Who built these cars?’ ‘Where did they come from?’, a question that had intensified and began to burn. So after some research it soon became clear that such epic names as George Barris, Ed Roth, Dean Jeffries, came to light and later on with the advent of Sky TV Boyd Coddington, Chip Foose and even recently with the Fast n’ Loud crew have all inspired me in my quest to produce a car that winks back at such legendary cars and builders. 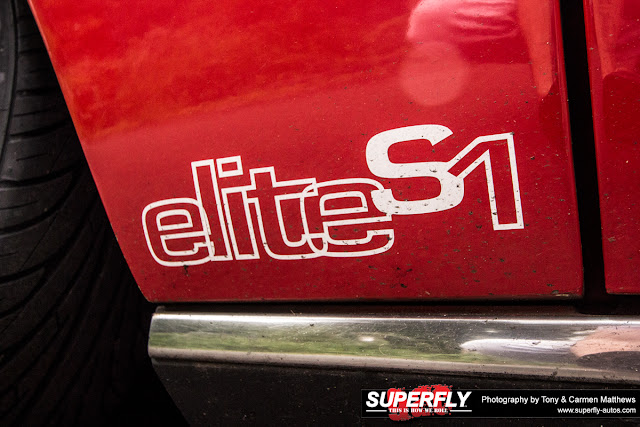 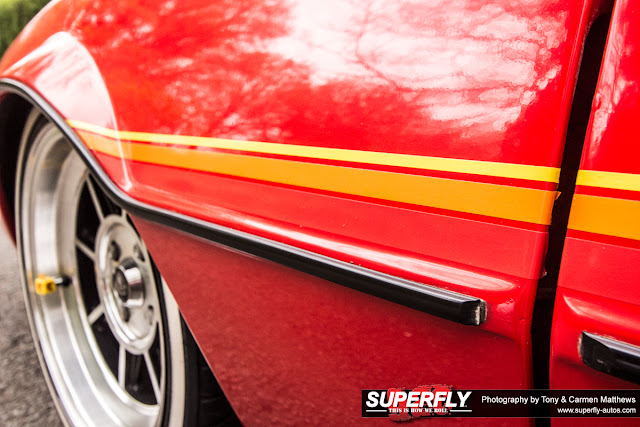 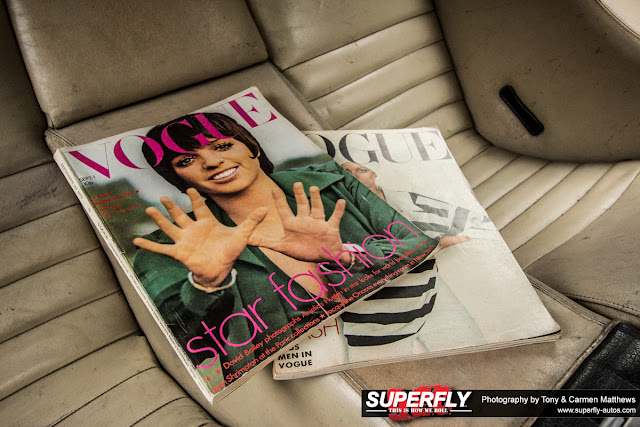 And so after years of dreaming about owning such a car and as I had a few quid in my back pocket I started to look into working on cars to modify or at least work on. A style and vision soon developed, low and moody, big rims and detailing were my passion early on and although my skill set is far greater now than those early days, it’s a rhetoric I hold dear. I never build a car to follow scene or kudos, and I’m certainly not in it for the glory, my aim is to create a car that I like and build on classic hotrod principles, ‘make it look better, go faster!’ And if it happens to get acknowledged in the media so be it, but that isn’t my motivation.
I come from a design background and have always been into cars and the way that they look, anybody that knows me knows that I’m a completely frustrated car designer at heart! I mean I was drawing and designing cars from an early age and I could have quite easily followed a path into automotive design but one thing and led to another I ended up selling my soul to the devil and started a career as a commercial artist, what a waste! 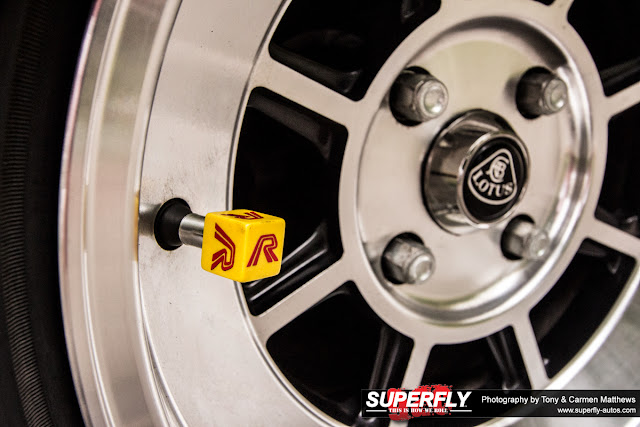 Anyway once I had started to earn a living I began my odyssey into car modification and started dabbling with 60’s VW’s taking on other peoples builds and putting my own stamp on them, always low, moody and a wheel change, but I soon drifted away and started looking at other options namely 70s wedges and was lucky enough to find a local S2 Lotus Esprit in need of restoration. The plan was to slam it and I had started to ask questions as the best way to do this, but as the Esprit was just too damn original to mess with, sometimes you just have to respect a cars originality and leave it alone. But eventually I decided to sell and after a couple of years without a classic car the bug had began tugging on me again and the hunt for a new build was back on… 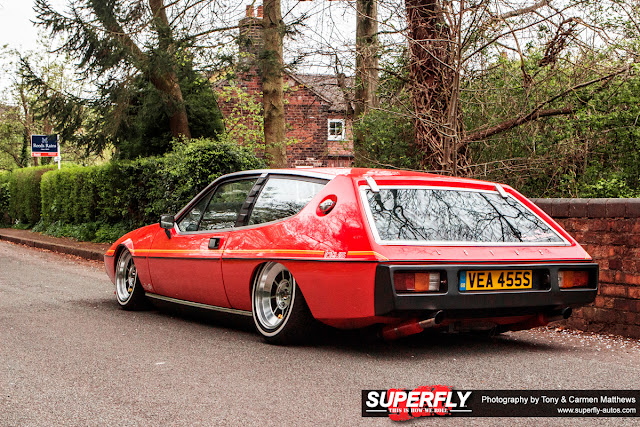 At this point, I’m starting to get curious as to what made Luke choose this 80’s fly Lotus and how did he actually get hold of one, as you don’t come by these that easily.
There’s an interesting story behind the purchase of the car says Luke. So I’d been without a classic car for a year or two and the itch had started to niggle again. So out came the laptop and the search was on. Couple of months had gone by and nothing had caught my eye and I was starting to lose a little faith, until my mind hit on the idea of stepping back into a 70’s Lotus wedge of which I had previously owned and restored a ’78 S2 Esprit.
Full Article: http://www.superfly-autos.com/features/the-real-red-panther-80s-inspired-lotus-elite/
Back to blog
Add to Wishlist
0
0