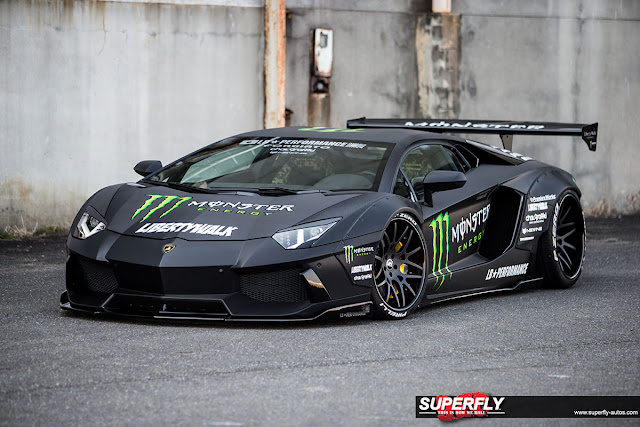 This article was originally posted by our friends over at www.superfly-autos.com. For more amazing car content, check them out now!

It’s the kind of dilemma that most of us can only dream of, but it’s a pressing, overriding issue for many of the world’s automotive elite: just how do you make sure your supercar stands out amongst the massed ranks of exuberantly wrapped Lamborghinis, flame-belching Ferraris and wide arched Porsches? You would have had to have been living under a massive, exhaust note-proof rock not to have noticed the explosion in the supercar market in recent years, with more manufacturers than ever before producing high power offerings intended to part the great and the good with their hard earned. The sheer number of supercars now available has only compounded the problem for those labouring under this most monied of dilemmas, but there’s a potential solution in the works courtesy of a Japanese firm (well, of course), Liberty Walk.

There’s every chance you’ll have seen Liberty Walk’s automotive creations online and on social media sites, where they can’t help but generate streams of passionate comments whenever they’re posted. In essence Liberty Walk sells bodykits, though it’s probably best to ditch any preconceived notions of poorly fitting fibreglass and wonky winged Vauxhall Novas – it’s a whole lot more sophisticated than that! Even the swiftest of glances at the firm’s range of offerings should be enough to tell you all you need to know, and they can supply kits to cars as exotic as the BMW M3, Maserati Granturismo, Lamborghini Huracan, Porsche 997, Audi R8, Nissan GT-R and the Ferrari 360.

If there’s one element that links all of Liberty Walk’s bodywork creations, it’s that they’re all uniformly extreme and intended to make the car in question stand out like the proverbial sore thumb. The amount of work that goes into designing and building these kits – not to mention the liberal amounts of carbon fibre used in their construction – means that they have a dramatic impact on any car they’re fitted to. Wings large and wide enough to make a Group B Audi Quattro blush are de rigueur, as are bulging, blistered arches, wheels with dishes deep enough to pass as a rental opportunity in NW5, and the icing on the cake, trick air suspension systems to complete the cat’s-eye-bothering look.

As you might expect given their all-encompassing design, fitting a Liberty Walk bodykit is most certainly not the work of five minutes, a selection of screwdrivers and a couple of axle stands. No, successful installation of one of the firm’s Works kits requires some minor surgery to the wheel arches, a considerable amount of measuring and tweaking…and the cajones to modify a six-figure supercar in the first place.

Liberty Walk’s creations have the power to make already arresting looking cars into fully paid up jaw-slackeners, which is precisely why they’ve proved so popular with the aforementioned automotive elite! They might be out of reach to all but the most wealthy of individuals but Liberty Walk’s kits function on another, altogether more democratic level – they’re works of automotive art. Free from the restrictions and regulations that the automotive industry must normally adhere to, Liberty Walk-clad cars are simply amazing to behold, and they look like the kind of thing a 10 year old might come up with if given the opportunity to pen a supercar while in the midst of a blue-Smartie induced sugar buzz.

While it’s been all but impossible to avoid Liberty Walk’s extreme creations online for some time now, it’s been decidedly difficult (read impossible) to track them down for a look first hand, until now that is. This weekend sees the Autosport International Show descend upon the NEC in Birmingham, and nestled amongst the F1 cars and WRC machines will be a pair of Liberty Walk’s own demo cars: the Fighter-equipped Ferrari 458 and Works-shod Lamborghini Aventador.
Autosport International marks the first time that Liberty Walk-clad supercars have been seen in Europe, so expect the pair of wide-arched monsters to draw quite a crowd from the moment they’re unveiled on Thursday 12th.

Both the Fighter-kitted 458 and Works-kitted Aventador make use of amazing three-piece split rims to fill their capacious wheel arches, AirREX digital air suspension that allows them to plunge to an ant’s eye perspective at the flick of a switch, and F1 Exhaust Valvetronic exhaust systems that really need to be heard first hand to be fully appreciated.